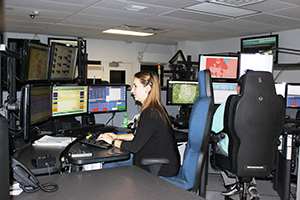 The Communications Division provides a vital link between deputies in the field and citizens of the county. The main functions are to:
• Answer 911 emergency lines, direct lines from other emergency agencies, general calls for service and emergency fire phone lines.
• Dispatch emergency personnel as needed while operating several radio frequencies simultaneously.
• Comply with the National Crime Information Center mandatory standards.

Telecommunicators answer five 911 lines, four administrative lines, two ring down lines that go directly to other agencies, two patrol lines and one emergency fire line. Communicators answered about 69,600 phone calls last year. Of that number, about 26,600 calls were for 911 emergencies. About 90 percent of the 911 calls came from cell phones that require the telecommunicator to locate where assistance is needed, unlike land-line phones that mostly give an exact location.

Telecommunicators take calls ranging from barking dog complaints to homicides to requests for the fire department or for an ambulance. The highly skilled telecommunicators process vast amounts of information that funnel through the communications hub at one time.

An in-depth training program of 22 weeks will start the telecommunicator off and potential for continuous training helps to keep Communications working at peak performance, providing county residents and emergency responders a life-line 24 hours a day.

While taking calls for service, telecommunicators must process documents for the National Crime Information Center national data base that requires focus and precision. NCIC is a computerized database of documented criminal justice information available to virtually every law enforcement agency nationwide, 24 hours a day, 365 days a year.

In 2016, telecommunicators entered about 5,900 entries into NCIC and at end of the year about 3,500 entries were still active. TBI requires validations each month to make sure the record is still active and accurate.