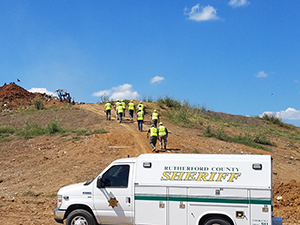 The Criminal Investigations Division is committed to investigate crimes in Rutherford County through professionalism and compassion toward victims.

Each crime report is reviewed and a supervisor may assign the case based on several factors. Not every case will be investigated. Once assigned, detectives use knowledge, skills, evidence and technology to solve the case.

Detectives improve on their knowledge and skills by completing specialized training courses. Their goal is to ensure crime victims their case is important and the team of investigators will strive to resolve the case.

Some cases may be assigned to the following specialized units:

This unit investigates crimes against family members, children and other domestic partners linked by statute. These detectives also work most sex crimes and other cases as needed. Domestic violence cases are the most crimes reported.

Family crimes detectives and a secretary keep track of registered sex offenders within the county and ensure their compliance with court stipulations.

Detectives are tasked primarily to crimes involving theft, burglary, arson and felony vandalism and may work other cases as needed.

Detectives are tasked primarily to crimes involving murder, rape, aggravated assaults and robbery and are subject to working other cases as needed.

Three CID detectives graduated the National Forensic Academy. One is the primary crime scene investigator, a second is the cold case investigator and the third is property crimes. All three work other cases as needed.

One detective is tasked primarily to work open-unsolved murders, kidnappings and suspicious deaths. The detective works other cases as needed.

One detective is assigned to the Middle Tennessee District of the U.S. Marshal’s Fugitive Task Force. The task force is made up of U.S. deputy U.S. marshals and state and local personnel who track federal and state fugitives from their respective agencies. They track violent offenders who have fled their jurisdiction throughout the U.S. and overseas.